Have Fun with Your Wedding Photos

We are all familiar with the classic wedding shots; the picture of the father of the bride giving his daughter away, the first kiss the bride and groom share as husband and wife, etc. But also keep in mind these fun ideas when having photos taken on your special day.

A picture can say a thousand words, but say exactly what you want to with a sign.

Although traditionally it is considered bad luck for the bride and groom to see one another before the ceremony they can still have one last picture together as an unwed couple. In the picture below, the photographer took a shot of the bride and groom separated by a door. 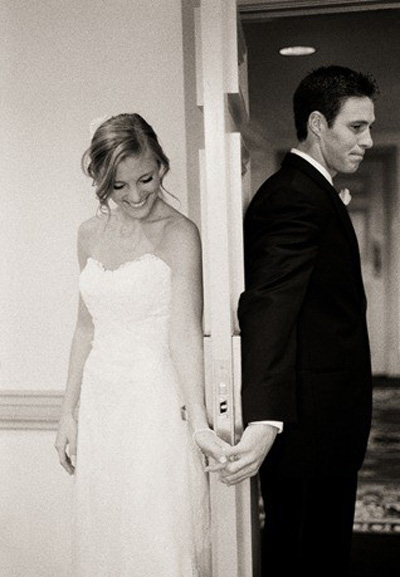 Picture frames are another great prop to use in your wedding photos. In the one below, the   ring bearer and flower girl got to play a role by holding the frame with the bride and groom in the background.

Highlight traits you love about one another like that great sense of humor the two of you share. Throw in a couple of fun shots! 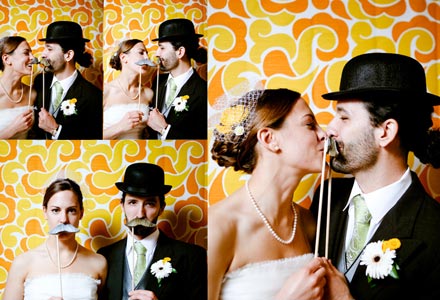 5. Down to the Last Detail

When you look back on your wedding photos throughout the years they will remind you of your special day. Have the photographer take a few pictures of details such as your bridesmaid’s shoes, or the your table settings to make the memory complete.

A Proposal To Remember “When I decided to ask Amy to marry me, I wanted something she would never forget”. This is what Isaac Lamb had in mind when he proposed to his girlfriend Amy Frankel last week. It wasn’t just any old proposal however. It begins with Amy, sitting in the back of a Honda CRV with a pair of headphones on. The car drives off slowly, and a song plays. It’s ‘Marry You” by Bruno Mars followed by about 60 of their friends and family lip syncing and dancing and following the car. The best part of the video isn’t watching the well thought out dance, but more so the look on her face as more and more people appeared and joined in. See for yourself the creativity and thought this Oregon man put into proposing to his girlfriend in a way she will never forget.

What are these wedding traditions and how can I incorporate them into my wedding?

This piece is intended to represent continuity as well as a link between the bride and her family. The idea is that although her last name is changing, her maiden identity will always remain part of her.

Examples: The veil your grandmother wore on her wedding day, vintage garter, locket with family pictures, old pictures of the bride and groom, or vintage family brooch. (Pictured below: a brooch bouquet)

This symbolizes the new union that the bride and the groom are creating together, and the hopes that it will happily endure forever.

Examples: Your new wedding gown, brand new makeup, the perfect new shoes, freshly picked flowers, the key to your new house, or your new initials monogrammed on a necklace or handkerchief (pictured below).

This “borrowed happiness” signifies the everlasting support from friends and family to the new couple. Specifically, the borrowing is supposed to be between the bride and a happily married woman; whether she is your mother, sister or friend is up to you!

Examples: Grandmother’s special cake recipe, sister’s wedding shoes, the earrings your mother wore on her special day, your cousin’s favorite lipstick, or even your grandparent’s Bible for the ceremony. (Picture below: mother’s pearls)

Historically, blue is a color that is symbolic to faithfulness, purity, and loyalty. This piece today is used to represent interminable love and fidelity in the new marriage.

3 Tips for a Happy and Rainy Wedding

What Happens if it Rains on My Wedding Day?

Fickle and unpredictable, the weather is one thing that you can’t exactly plan on when it comes to your wedding. Spring weddings especially are at risk for unpredictable showers, so what are you to do if Mother Nature decides to rain on your wedding? Below are a few tips to help you prepare for, and deal with, unfavorable weather on your special day.

The best way to combat icky weather is by having a “rain plan”, particularly if you are planning on having your wedding outdoors.

When looking at venues, try to find one that has an indoor option as well where you can transfer your ceremony or reception if it begins to rain.

If you absolutely cannot part with your outdoor setting and it does not have an indoor “escape plan” look into the costs of renting a tent or keeping one on hold. Keep in mind this solution only works for light to moderate rain storms- a heavy rain will soak the ground beneath the tent. Regardless of how absolutely stunning your venue is, nobody will appreciate muddy shoes!

Look at the weather forecast prior to your wedding, and if it looks like it’s going to rain start looking for rain essentials for those in your wedding. You can’t control the weather but you can still maintain unity in the umbrellas your bridesmaids are using!

What Do You Do With Your Dress After Your Wedding

Make the Best of Your Dress After Your Special Day

Whether you have just celebrated your wedding last week or even five years ago, there is one souvenir that you most likely won’t use or perhaps look at again. There it hangs in all its glory in the back of your closet collecting dust and taking up room. It really isn’t benefiting anybody, is it? It shined on your special day, and chances are it is in good enough shape to be used again and by somebody who otherwise wouldn’t have the privilege of wearing such a beautiful gown. If you are interested in making a difference in somebody else’s life, and a little more space in your closet, consider some of these options for donating your wedding dress.

Brides Against Breast Cancer
www.bridesagainstbreastcancer.com
Donate your dress to this organization and the proceeds they receive from selling the used dress will go toward programs for women with breast cancer and their families. Brides can also purchase their dress from this philanthropy.
Brides Across America
www.bridesacrossamerica.com
Military brides are often given the short end of the stick when it comes to their dream wedding due to financial struggles and working around their fiancées deployment time frame. This is a great way to support our troops and their loved ones by enabling them the special day they deserve.
The Bridal Garden
http://bridalgarden.org/charity.html
This non-profit organization uses the profit from donated wedding dresses to support less fortunate children in New York City. They accept bridal gowns, as well as veils and other accessories.
Brides for Haiti!
http://www.st-josephs-haiti.com/3694/index.html
Donate your dress to St. Mary’s Catholic Church in Maryland and they will use the money from selling the dress to consignment shops to help Haiti and the those in need there.
Mary Madeline Project
http://www.marymadelineproject.org/How_you_can_help.htm
Support families who are suffering the loss of a baby by donating your dress to the Mary Madeline Project. Because they are so difficult to find, the dresses are used by people who volunteer their time and talent to make burial outfits and blankets for the infant. 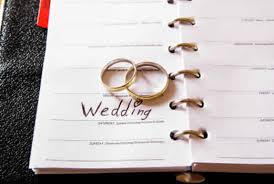 When planning your wedding day, here are some suggested dates to stay away from in 2012 and 2013

Mother’s Day (always a Sunday)
Make sure your mom is okay with sharing this weekend with your wedding — but it could be the perfect opportunity to honor her.
May 13, 2012
May 12, 2013

If you don’t live in the host city and are marrying on the Saturday rather than the Sunday of Super Bowl weekend, then the big game shouldn’t affect your wedding too much — unless you and your husband are diehard pigskin fans and can’t bear to miss the big game instead of leaving on your honeymoon. If in doubt, steer clear of these dates:
February 5, 2012
February 3, 2013

A True Happily Ever After

May 8, 2012 No Comments
US hikers who were held in Iran marry in California
Two Americans who were detained and accused of spying after hiking near the Iraq-Iran border three years ago have been married in Northern California, a family friend said Sunday.

Shane Bauer and Sarah Shourd were married at 4 p.m. Saturday at an undisclosed location, San Francisco attorney Ben Rosenfeld said. About 200 people attended the wedding — a “beautiful ceremony” that was held in a setting “chosen for its pastoral beauty,” he said.
Bauer, Shourd and Josh Fattal, all University of California, Berkeley graduates, were arrested on July 31, 2009, and held in Iran.
Iran accused the three of illegally entering the country and of spying. All three said they might have accidentally wandered across the unmarked frontier but they strongly denied espionage.
Bauer proposed to Shourd in January 2010 while both were in prison, fashioning an impromptu ring out of threads from his shirt.
Bauer and Fattal were sentenced to eight years after being convicted on spy-related charges, but were released after more than two years. Shourd was released on health grounds after 14 months.
Shourd grew up in Southern California, Bauer is a native on Minnesota and Fattal grew up in Pennsylvania. Shourd and Bauer have been living in the San Francisco Bay area.
Rosenfeld declined to provide further details of the wedding. He did not say where the couple was honeymooning.

Advice For A Happy Marriage- Words To Live By

The advice given by this couple is so adorable and funny.

You might be wondering who Kenny and Selma are. Well, they’re just about the cutest and funniest old married couple you’ve seen in awhile. Kenny and Selma have been married for over 70 years and are just trying to share some of their secrets for a long and happy marriage.

Register for FREE passes
I Want To Exhibit